A flurry of announcements at the TAG Heuer exhibition.

A pioneer in motors sports sponsorship for over 50 years, the brand is now more of a household name in the discipline than ever before. 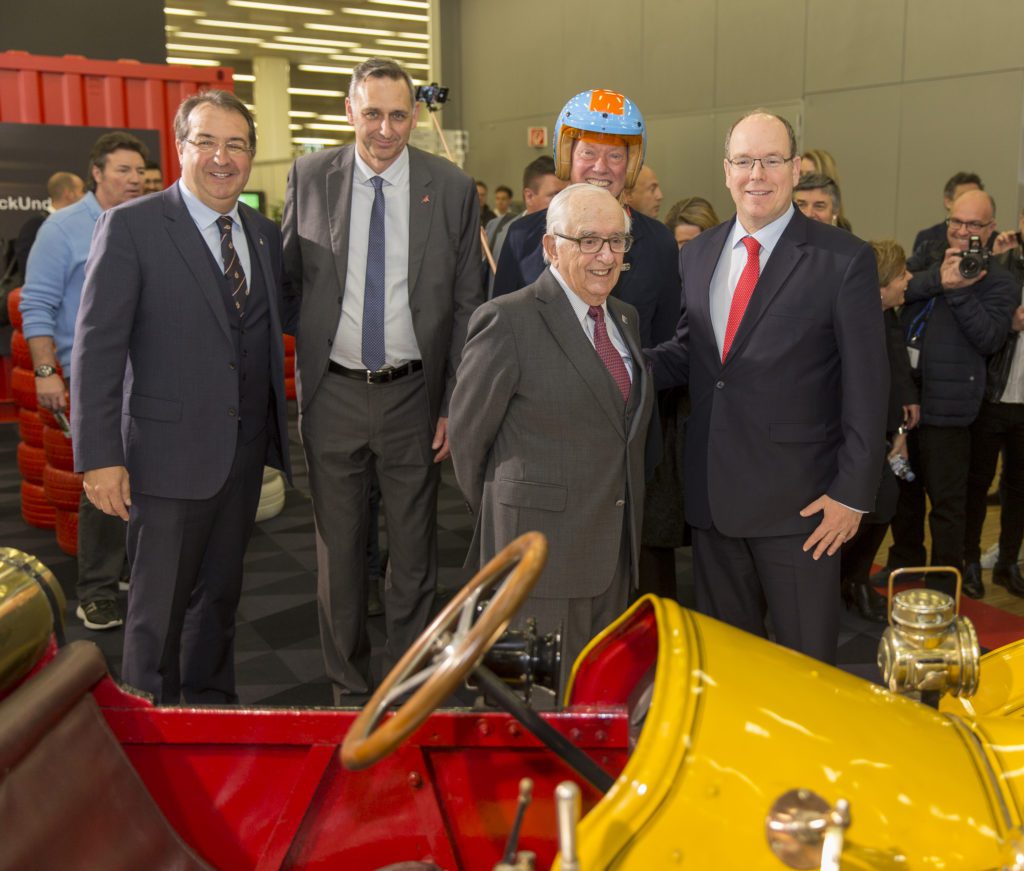 With the exceptional presence of HSH Prince Albert II of Monaco !

What a family picture! 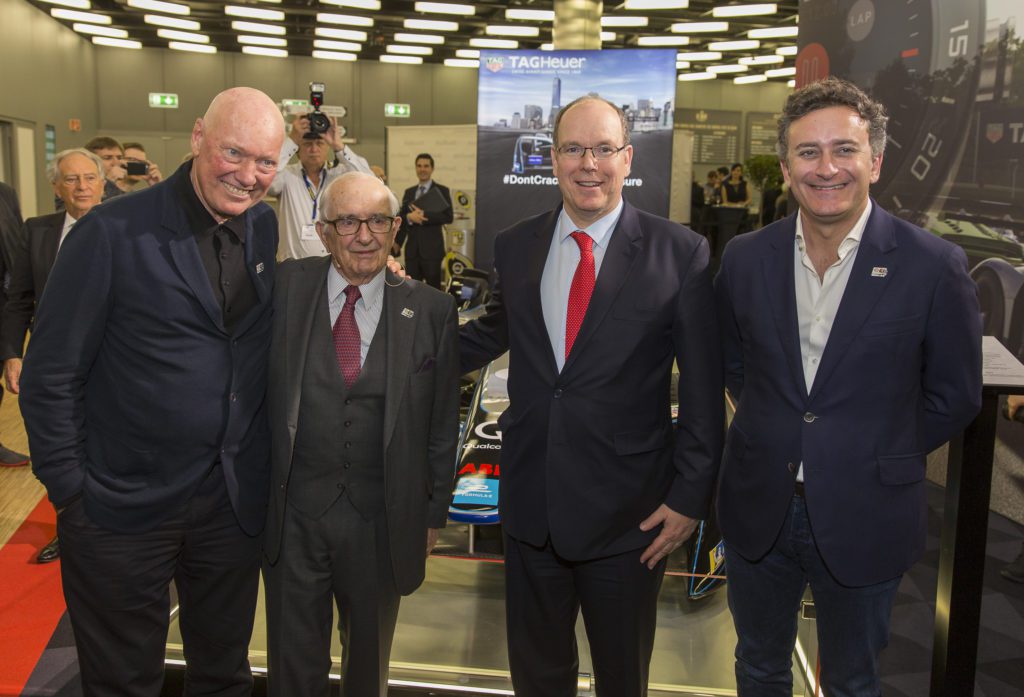 Geneva, Switzerland, 7 March 2018:  Today, as part of the Geneva International Motor Show, Jean-Claude Biver, CEO of TAG Heuer and President of the LVMH Group Watch Division, was delighted to welcome some of the most prominent players in the motor racing world to announce the brand’s new partnerships within this exciting discipline.

Christian Horner, Team Principal of the Aston Martin Red Bull Racing Formula One Team, Alejandro Agag, CEO of ABB Formula E, Andy Palmer, CEO and President of Aston Martin, Sanjay Hinduja and Frank Rutten, Chairman and Vice President at Gulf Oil International, Philippe Renzini, Director of the Cars Collection of HSH Prince of Monaco and Jack Heuer, Honorary Chairman of TAG Heuer and pioneer of motorsports sponsorship, were all present to celebrate the unique history that TAG Heuer has enjoyed in the world of motor racing. Also in presence for the event was HSH Prince Albert II of Monaco !

At the heart of an exhibition featuring exceptional racing cars loaned by each guest for this occasion, TAG Heuer revealed its partnership with the Monaco Top Cars Collection, and with Gulf Oil International, and presented the Monaco Gulf and the first two special editions in tribute to Aston Martin. The Swiss watch maker also took the opportunity to announce the extension of its partnership with ABB Formula E. Four new agreements that will strengthen TAG Heuer’s position as an avant-garde luxury watch brand with a leading position in the automotive sector. 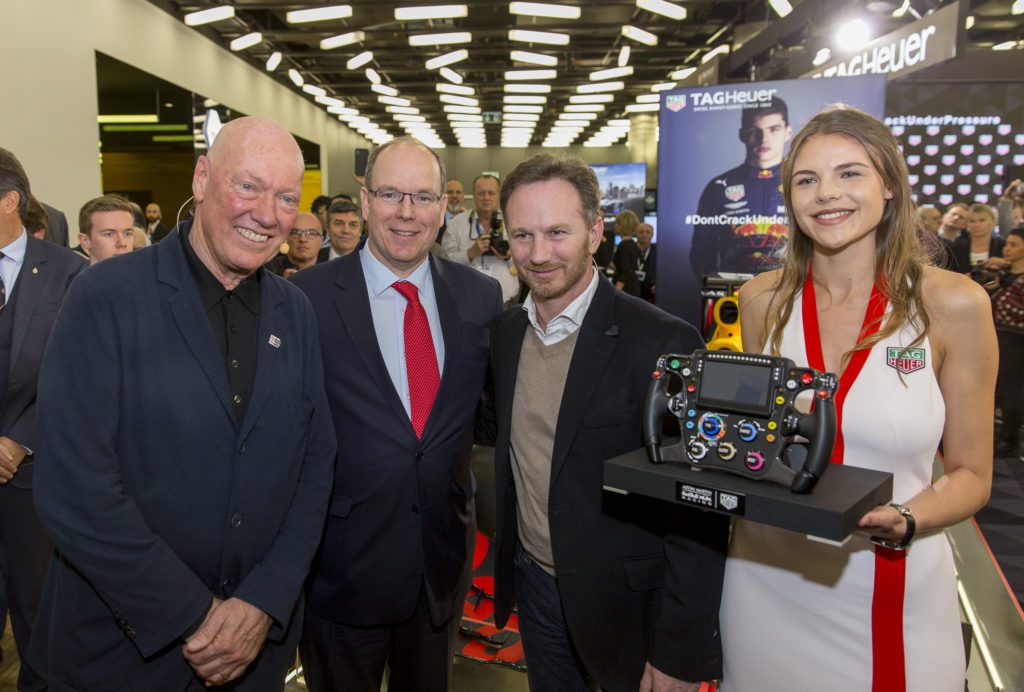 TAG Heuer has had close links with Monaco throughout its history. Since 2011, the Swiss watch brand has been the Official Partner and Official Watch of the Automobile Club de Monaco and the Official Timekeeper of the most prestigious and one of the oldest motor races in the world, the iconic Monaco Grand Prix. At this circuit, TAG Heuer occupies its own very special place, written in the great annals of history. Then, of course, there is the most iconic of the brand’s models, the Monaco, which takes its name from the legendary race.

Today, TAG Heuer is strengthening its links with the Principality by announcing a partnership with the Monaco Top Cars Collection. Alongside the 16 iconic vehicles on display in the museum, TAG Heuer will be adding 16 watches dating from the same era as the cars, taken from the La Chaux-de-Fonds museum’s heritage collection.

Conquering time throughout history, and through exceptional pieces. This is a partnership brimming with emotion, and promise.

To seal this union, Christian Horner, Team Principal of the Aston Martin Red Bull Racing Formula One team, for whom TAG Heuer is also the Official Timekeeper, has donated the steering wheel from a Red Bull Racing Showcar displayed on the stand, presenting it to the Monaco Top Cars Collection in a symbolic gesture. 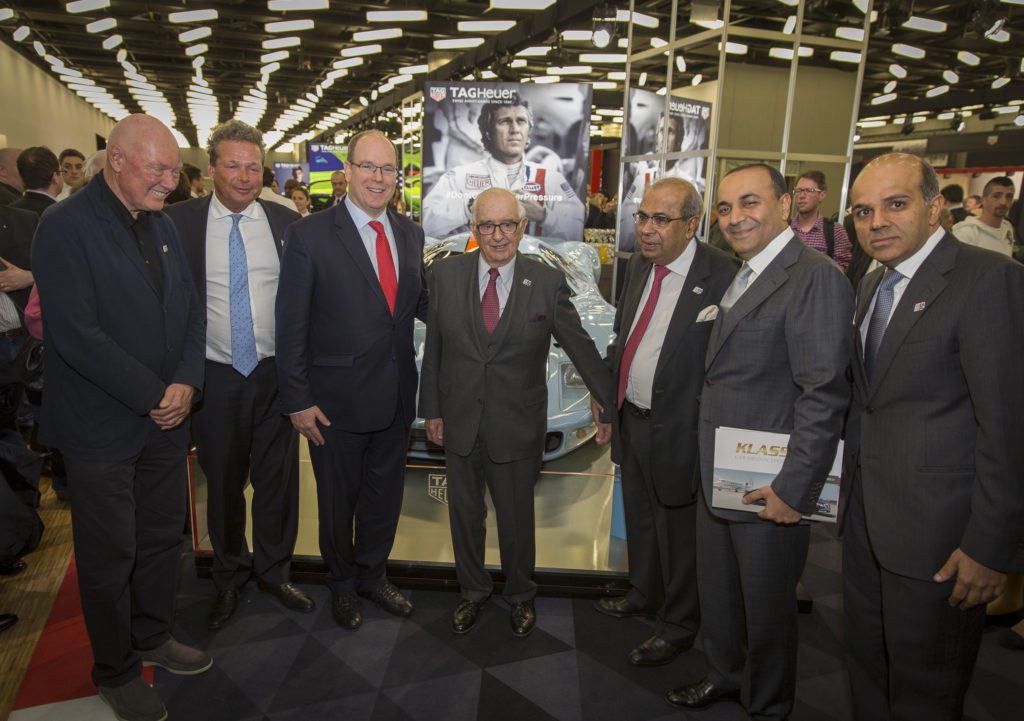 These two iconic brands in the automotive world have made their union official, establishing a firm link between the past and the present. With its immediately recognisable blue and orange stripes, Gulf has been a well-known player in the automotive industry for over 115 years. Quality, endurance and passion are the company’s watchwords; proven by their history of innovation, invention and continuing development. It was the first company to drill for oil below the sea, and in 1913, became the first in the world to open a petrol station.

It shares these values with the Swiss watchmaking brand. TAG Heuer and Gulf have crossed paths several times, but the most notable was in 1971, in the film “Le Mans”, when Steve McQueen wore a Heuer Monaco on his wrist while driving a Porsche 917 that featured the Gulf logo.

It’s a real privilege to forge links with Gulf and its history in motor sport, which includes the Porsche 917K, Steve McQueen, the 24 Hours of Le Mans and the Monaco watch. It’s a prestigious and emotional partnership. There are few other brands that could share as many memories of pit stops and which have a relationship as strong and authentic. TAG Heuer and Gulf share a passion, and this forms a basis for great things to come, starting with the Monaco Special Edition Gulf Calibre 11 in racing colours, and featuring the logo of the oil company,  which was presented at this event.

To celebrate this new partnership, TAG Heuer presented two magnificent special editions honouring the British luxury brand. The Swiss watchmaker drew on its extensive expertise and through a strong collaboration with the Aston Martin design team to develop the designs, drawing direct inspiration from the colours, shapes, patterns and materials characteristic of Aston Martin’s sports cars. Every detail imparts a creative touch and recalls the overarching automotive spirit of the partnership.

The first model is the prestigious TAG Heuer Carrera Calibre Heuer 01 chronograph, which draws inspiration from Aston Martin’s luxury universe. The famous manufacture movement is visible through the dial, which is skeletonised in a hexagonal pattern that recalls the details on the new Vantage, for an exclusive Aston Martin dial. Meanwhile, the sturdy 45 mm solid steel case also presents a design that was specifically developed for this edition, which features lines on the side to evoke speed, the race track and piston. In another of the piece’s exclusive features, the shape of the lugs has been revisited, taking inspiration from the lines of Aston Martin’s emblematic bodywork. With a black ceramic tachymeter bezel, this piece is the perfect reflection of the expertise and technical mastery arising from the partnership between the two brands.

The second model is a TAG Heuer Formula 1 chronograph inspired by Aston Martin Racing. The TAG Heuer Formula 1 is TAG Heuer’s ultimate motor racing model, synonymous with performance and speed. Entirely in steel and measuring 43 mm in diameter, this quartz chronograph features a notched steel bezel and an aluminium ring with a tachymeter scale. The indexes, seconds hand and Aston Martin’s famous winged logo all don Aston Martin Racing’s specific shade of lime essence and stand out against the watch’s black dial to beautiful effect. The movement is accurate to a tenth of a second – an indispensable feature in a motor racing watch – and is displayed on the small counter at 6 o’clock, with the minute counter at 9 o’clock and the current seconds counter at 3 o’clock. The model comes with a magnificent and unique black leather strap. Once again this is exclusively for Aston Martin as this is the first time TAG Heuer uses a leather strap in the TAG Heuer Formula 1 collection. With a lime essence topstitching, it adds character and sporty style to the watch.

TAG Heuer extends its partnership with the ABB Formula E

Jean-Claude Biver also took the opportunity to announce that TAG Heuer will extend its partnership as Official Timekeeper of the ABB Formula E.

Since the very first day, TAG Heuer has believed in the future of this first FIA World Championship for single-seater electric vehicles, demonstrating this belief through its involvement as a Founding Partner. As the Official Watch and Official Timekeeper of this innovative competition, TAG Heuer is proud to have worked with all those involved to develop this unique world championship that perfectly combines high-level racing with the latest technology, and brings the event directly to the heart of cities, right to the doorstep of the public and young people. The first e-Prix took place in Beijing, China in September 2014. This year, the Championship will be bring motor sports right back to the heart of some of the most exciting cities in Europe, with races to be held in Rome, Paris, Berlin and Zürich on June 10th.

About the TAG Heuer exhibition at the Geneva International Motor Show

Following the success of the three previous exhibitions, and for the fourth consecutive year, TAG Heuer is organising a unique exhibition of exceptional cars as part of the Geneva International Motor Show, which will be held from 8th to 18th March 2018. TAG Heuer is the only watch brand to attend the Show, and will use this exclusive occasion to unveil the new pieces in its collection and give the public the opportunity to discover its motoring heritage.

To illustrate this prestigious history, TAG Heuer will devote its 1000 m2 stand to the display of 5 exceptional race cars:

Throughout the show, the stand will also feature five exclusive racing simulators, a bar open to the public, two VIP lounges, a large screen and a box with the new “Samsung Gear VR” presenting the various TAG Heuer worlds.

To complete the installation, there will be a pop-up store where visitors can enjoy the TAG Heuer boutique experience. It will carry the new TAG Heuer watch collection available for purchase, including the TAG Heuer Connected Modular 45, the brand new 41 and, last but not least, the recent re-issue of the legendary Monaco with its famous square blue dial featuring a left-hand crown.