Montblanc ushers in the New Year with its annual limited edition writing instruments honouring the myths and legends of the Eastern World.

Through the artistry of the finest craftsmanship, the Montblanc Signs and Symbols collection tells the stories of the signs that once originated in the world of myths and legends and continue to retain all of their significance today in Eastern culture and beyond.

Released annually since 2015, the collection is made up of the “Legend of Zodiacs”, a writing instrument inspired by the zodiac sign of the year to come and “A Journey Among Dragons”, a line that pays homage to mythical creatures and their great powers. Bringing together the beauty of precious stones and artisanship of fine hand engraving on its 925 sterling silver cap, each edition differs in design and meaning to honour the ancient symbols that have inspired them. 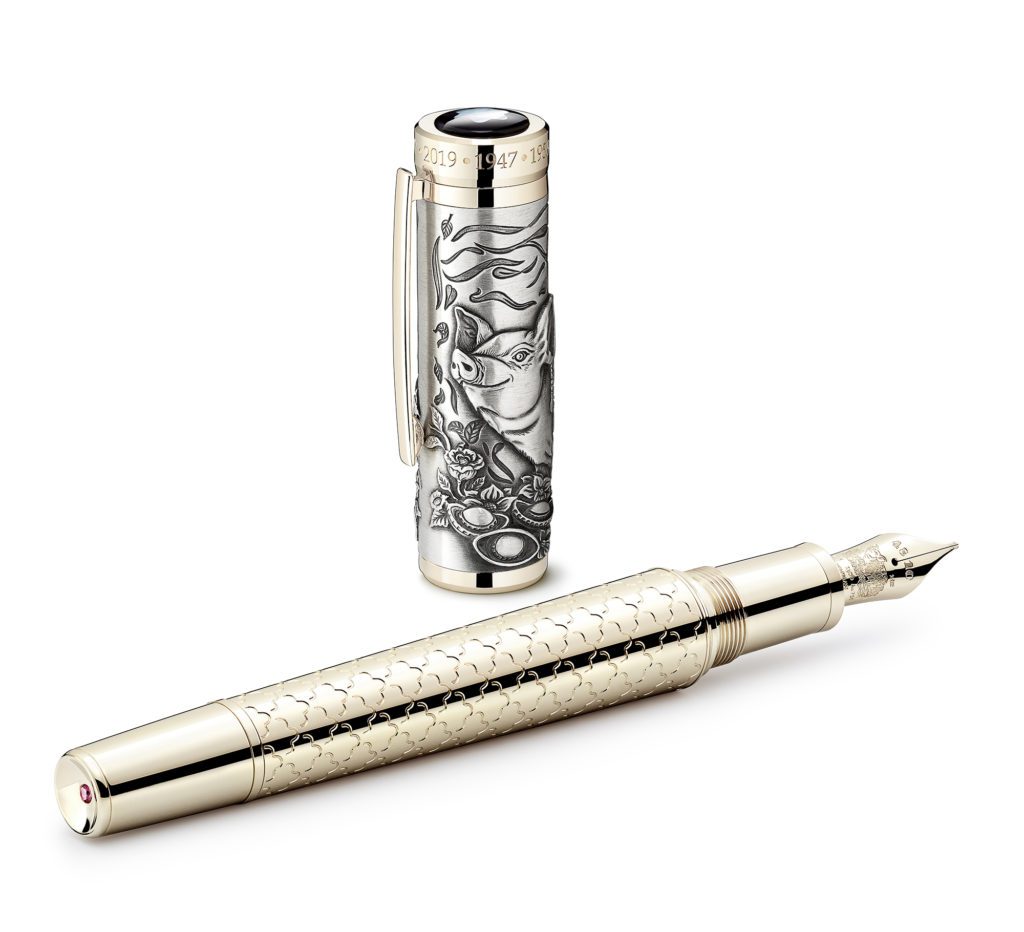 In addition to offering an indication of the opportunities for the year ahead, the defining characteristics of each zodiac sign are said to be transferred to people born in that year. According to the legend of the Zodiacs, the Jade Emperor held a race for all the animals in his kingdom, promising the first twelve animals to cross the stream that they would be named the animals of the zodiac. The fourth of the Legend of Zodiacs editions to be released by Montblanc celebrates the year of the pig. Because it took a break halfway through the crossing to relax and eat, the pig made it to the other bank as the twelfth and final animal to be accepted in the zodiac.

The hand-engraved design on the silver cap is a detailed representation of the animal that is associated with good fortune, success, wealth and resilience. The zodiac symbol is elegantly stamped on the Au750 solid gold nib, while the cone is set with a sparkling ruby, the birthstone of the pig. The Montblanc emblem that crowns the fountain pen is crafted from precious mother of pearl. Bringing additional good fortune for the year ahead, the special limitation number of the Pig Limited Edition is a celebration of the lucky number 8 with 512 being the sum total of 8x8x8.

Myths and legends depict the East Asian dragon in a multitude of figures illustrating its numerous traits and great powers. The mystical dragon god carries the attributes of different animals: the head of a camel, the eyes of a demon, the horns of a stag, the ears of a cow, the neck of a snake, tiger feet, eagle talons and the scaly body of a fish. Over the centuries, a few of these dragons have become crystallized in Asian culture. Given its standing not only as one of the 12 zodiac symbols of the East Asian calendar, but also as one of the four direction or miracle animals, the dragon has a substantial influence on everyday occurrences in East Asian life. Among them, Tianlong, the Heavenly Dragon (天龍 ) who guards the celestial palaces of the gods and pull their chariots. Considered the dragon of the Emperor, the Tianlong could fly and was always depicted with five toes instead of just three or four toes. Crafted in Montblanc’s Artisan Atelier, the cast sterling silver cap is engraved by hand with an artistic representation of the dragon. The dragon motif is carried through to the silver barrel in white lacquer, decorated with an elegant dragon guilloche underneath.

At the base of the writing instrument, a blue lapis lazuli evokes the Dragon’s role as the ruler of moving bodies of water, while the champagne gold fittings are a reference to gold coloured dragons that have special attributes such as wealth, wisdom, and kindness. Crowning the limited edition, the Montblanc emblem in mother-of-pearl is inlayed in black onyx and covered with a sapphire glass. Limited to just 88 pieces in reference to the luck that comes from the number 8, this “A Journey Among Dragons” masterpiece brings to life the modern spirit of Eastern culture with elegance and creativity.