The new business phablet has a 5.7-inch Super AMOLED screen with a full HD (1920×1080) resolution and inside there is either a Qualcomm Snapdragon 800 quad core chip running at 2.3GHz or a Samsung octo-core chip, with the latter debuting sans LTE. The Note III has 3GB of memory, comes with either 32GB or 64GB of internal storage and has a microSD card slot.

The Galaxy Note III features the same 13-megapixel camera found on the Galaxy S4 as well as all the fancy image stabilisation, geo-tagging and autofocusing magic. Samsung is even claiming that the camera is capable of capturing 4K resolution video at 30 frames per second. Before the launch it was rumoured that the Note III would feature a finger print reader, however Samsung made no mention of such a feature at launch, but did announce that the phone will come with the company’s Knox security suite to keep information safe. 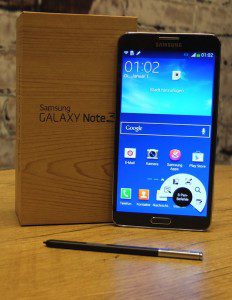