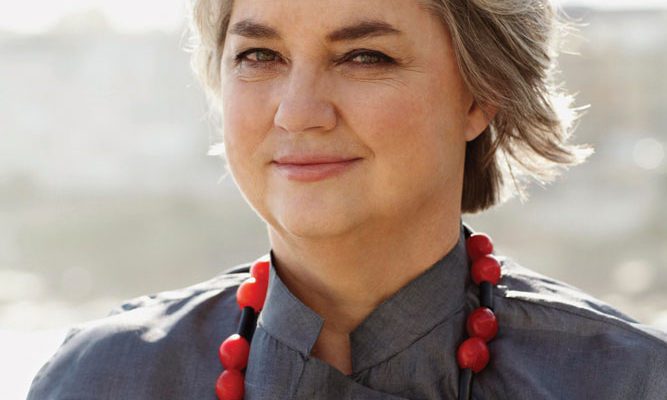 25 years ago, artist Carrol Boyes created a single pair of pewter salad servers that she’d cast IN HER HOME BASEMENT STUDIO. This sparked the beginning of what would ultimately become a beloved household name, now famous the world over.

Much like the unwearying mind of its creator, the Carrol Boyes brand knows few creative boundaries. The original pewter tableware range, from which this multi-cultural organisation was born, has now significantly expanded to include a staggering thousand-or-more unique designs that include bathroom and office accessories, handbags, wallets and even sunglasses. The company has also added ceramics and glassware to the mix, which have also comfortably expanded over the years. The extensive Carrol Boyes range is now a global entity with over 30 stand-alone shops nationally and internationally in locations as far-flung as Cyprus, Perth and Singapore – and with collections also available at multiple sales points worldwide. 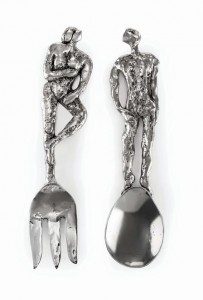 As a country girl growing up on a family farm near Tzaneen in the Limpopo Province, Carrol was fascinated by artists who painted in the realistic style. She also admired the local Shangaan artists and their talent for recreating the three-dimensional human form through their figurative woodcarvings.

As a child she drew portraits of her family relentlessly, and honed her skills for the human form. She spent hours scribbling on surfaces and transposing everything that came into her head. “If you’re an artist, it’s a part of you from youth,” she believes.

Later, with a degree in Fine Arts (Sculpture) from the University of Pretoria, Carrol spent over a decade pursuing a career as an art and English teacher to fishermen’s children in Hout Bay before she finally became involved in full-time art design. “When I turned 35 I decided the time had finally arrived to turn my passion into a business,” she says. “I saved for around six months in order to be able to support myself and then I resigned from my job. It was 1989 and I already had the basement studio in my home, and so what was a part-time hobby really became my life. I worked into the night, generally finishing at around two in the morning. I didn’t want to look back and know I hadn’t tried my best to make it work.”

Word quickly spread regarding the quality of Carrol’s work and she quickly expanded from verdigris and copper mediums into pewter items. She also looked at using cast aluminium. Bigger and better premises were soon needed and things transitioned quickly. People started to ask for more items – including cutlery that could go into a dishwasher – and so the company started to develop new products, eventually even acquiring a stainless steel cutlery company, which had previously manufactured items for the airline industry.

“What I wanted to do with my products was bring sculpture into the home,” explains Carrol.

“People often find sculptural art daunting, so I found a way to make it practical. I also love the fact that functional items can also be soulful,” she says. “Everything I create has a function and I often ask myself what would I want and use in my home, or how would I like certain things to work. It gives me great joy to realise that South Africans and others all over the world are using my pieces at their dinner tables or on their desks or in their homes. It’s like an invisible thread that ties us all together.

“People often ask why I work with a particular style or why I have a fascination with the human form. I suppose the easiest way to explain it is to say that it’s much like a person’s handwriting. You could make minor changes that might alter something slightly, but it would still have the same shape and inclination. It’s not something you plan consciously. It comes from inside. Stylised body shapes are the form my thoughts take.”

It’s interesting to look at how the iconic Man/Woman salad servers, which were the first commercially available Carrol Boyes functional art pieces, have transitioned over the years in respect of design trends and materials. Whilst the original pewter pair has been re-released as part of a limited edition in celebration of the company’s quarter century anniversary, the other Man/Woman servers cast over many years have employed varying materials and organic shapes, yet all bear the same intrinsic characteristics and lighthearted style.

“I see the human body in everything I look at,” says Carrol. “If I catch a glimpse of a hammer lying in a toolbox it becomes a woman with curly hair and a big, hooked nose. If I drive past a lamppost, I see a tall, thin man leaning over. I believe that art should enable us to see the lighter side of life – so my designs are often flamboyant and fun. We shouldn’t take things or ourselves too seriously.” 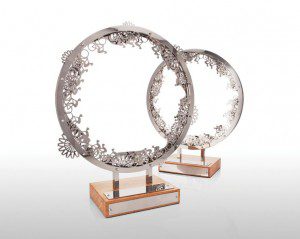 As a hands-on leader Carrol is as much a pivotal part of the day-to-day running of the business as when she first started, although the focus and intensity has now shifted. “The early days of building up the business were intensely physical,” she explains. “I welded everything myself and I had to have the mental tenacity to believe in what I was doing as well as the physical ability to match it.” These days she’s still ultimately the final decision-maker, but is assisted by a strong multi-talented and multi-social team that is afforded opportunity to participate in the dynamics of the company’s various operating areas.

The company has three distinct divisions; a manufacturing division in the form of a large factory in the Limpopo a factory in Paarden Eiland which is the distribution division and a retail division which runs dedicated stores across SA and beyond. The establishment of the Carrol Boyes Employees’ Trust, which owns 20% of the shares of the retail division, gives ownership to all employees.

Carrol’s love of and for South Africa is evident in the company’s numerous associated projects and bears testimony to her own sincere commitment to the betterment and welfare of individuals in the community and workplace.

The company strongly supports numerous social responsibility enterprises, such as Monkeybiz, a non-profit organisation which empowers women to earn a living from beadwork, and which greatly contributed to a revival of the craft. Started by Carrol’s late partner, ceramicist Barbara Jackson, Monkeybiz supplies beads to women of the Cape Township areas providing jobs for around 450 disadvantaged women. “This means they can now work from home and take care of their children,” she explains. A large assortment of these quirky and beautifully designed beaded products are made and then displayed and sold within the Carrol Boyes outlets worldwide.

Carrol is also involved in mentoring. In 2004 she decided to involve young artists and designers in the art department, nurturing them and encouraging them to come up with designs that could contribute to the creative side of the business. The company also founded the Metal New Designer Search, a local competition in which the winners have their products developed and also work within the company. Her latest ‘Out Of the World’ series also reflects a stunning range of collaborations.
Alongside her vast range of products, Carrol Boyes has nurtured an entrepreneurial spirit, energy and fortitude that has not diminished over the brand’s remarkable 25 years of business.