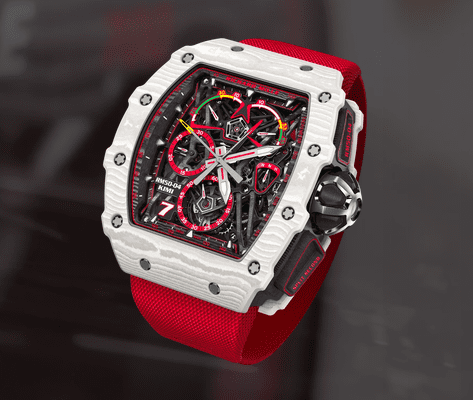 The 2019 Singapore Formula 1 Grand Prix was the perfect occasion for the brand to present the RM 50-04 Tourbillon Split-Seconds Chronograph Kimi Räikkönen alongside our partner. The piece pays homage to both this great driver and his team: Alfa Romeo Racing Team, the legendary manufacturer inseparable from car racing. 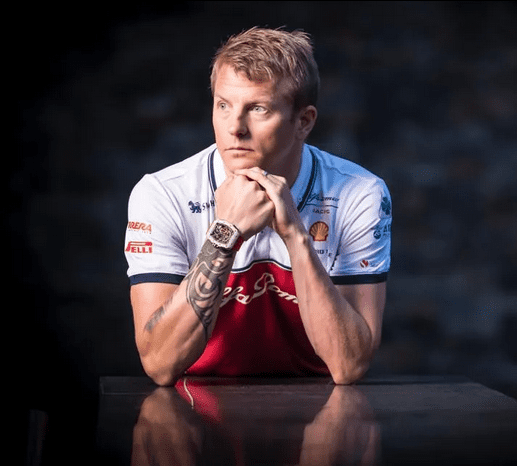 ‘We in Finland are known for our “guts” and determination. We even have a word for it – “sisu”. We have it in our stomachs. It’s what gets us past the finishing line, despite the odds. In my sport, however, sisu is not enough. I have to rely on high-performance technology and team-work – the kind I’ve come to appreciate since joining the Alfa Romeo Racing Team. Most of all, though, there has to be sheer passion! Richard Mille has powered his own engine for years with all three of these,– guts, technological prowess and above all fun. That’s why I am more than happy to be at the wheel with the ground-breaking RM 50-04 on my wrist.’

Crowned world champion in 2007 after being vice world champion in 2003 and 2005, 39-year-old Kimi Räikkönen is a seasoned veteran on the 2019 stage. At the Singapore Grand Prix, the so-called “Iceman” had the chance to take his 307th start. Yet further evidence of the driver’s exceptional longevity, who over the course of his 18-year career has made 103 podium finishes, coming first on 21 occasions. Now more focused on the pleasure of driving, he has entirely rethought his approach to Formula 1: ‘From now on, I consider F1 to be a hobby,” confides Kimi. “I no longer feel the same pressure and I can just have fun at the wheel. That’s what I enjoy doing, even if I’m still concentrated on doing my best to achieve the result that the car deserves.’ Kimi’s legendary reserved disposition, his ability to keep his cool under any circumstances—which earned him his nickname—, his reflexes and his finesse remain just as impressive as ever. Appointed Sports Ambassador in 2017 in Finland, he is currently Finland’s most decorated Formula 1 driver, ahead of the great Mika Häkkinen. 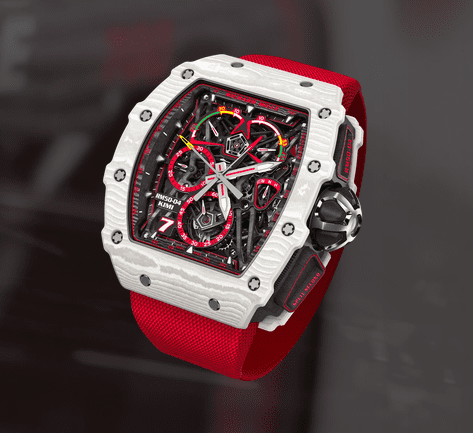 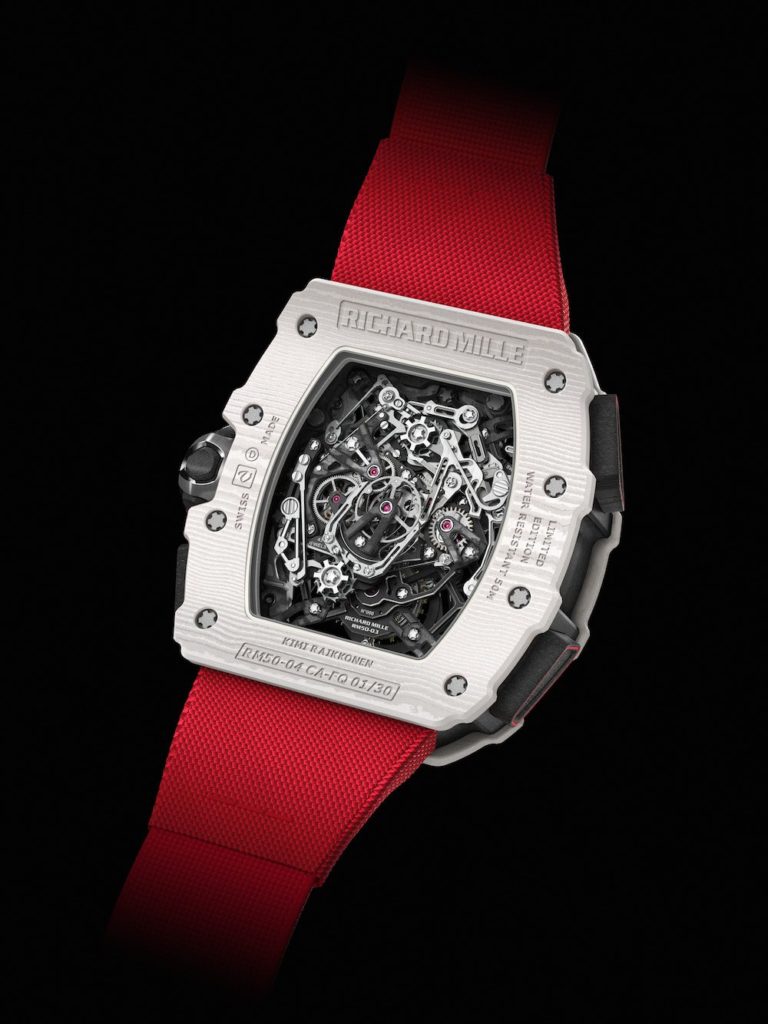 Actual power reserve results will depend on the period of time the chronograph is utilised.

The calibre RM50-03 weighs just 7 grams and fully deserves its qualifier ‘ultralight’. The secret to its feather weight lies in the use of grade 5 Titanium and Carbon TPT®, and in the extreme skeletonisation of components. Likewise, the density, stiffness and low thermal conductivity of titanium make it a material of choice in Formula 1 engineering build programme.

BASEPLATE AND BRIDGES IN GRADE 5 TITANIUM

The baseplate and a portion of the bridges are crafted in grade 5 titanium, a biocompatible, highly corrosion-resistant and remarkably rigid alloy, which enables the gear train to function effortlessly. The alloy is 90% grade 5 titanium, 6% aluminium and 4% vanadium. This combination further increases the material’s mechanical properties, which explains its frequent use in the aerospace, aeronautics and automobile industries.

Some of the bridges belonging to the split-seconds chronograph are made from Carbon TPT®, as is the transverse carriage supporting the entire calibre, together with the barrel and tourbillon bridges. Attached to the caseband, this carriage circumvents the need for a casing ring, allowing the movement to be perfectly integrated into the case.

All of these technical solutions give this complex calibre—with its extreme weight to resistance ratio—an impressive resistance capacity, tested in our workshops to shocks of 5,000 g’s 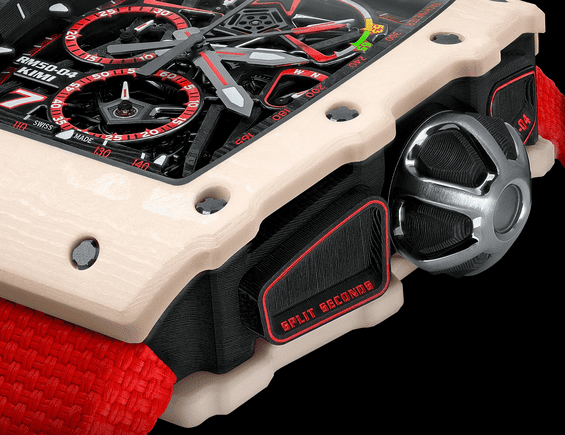 The 6-column wheel that controls the various rockers for the split-seconds function was designed to guarantee flawlessly simultaneous movement, clean function lock, and highly stable settings. 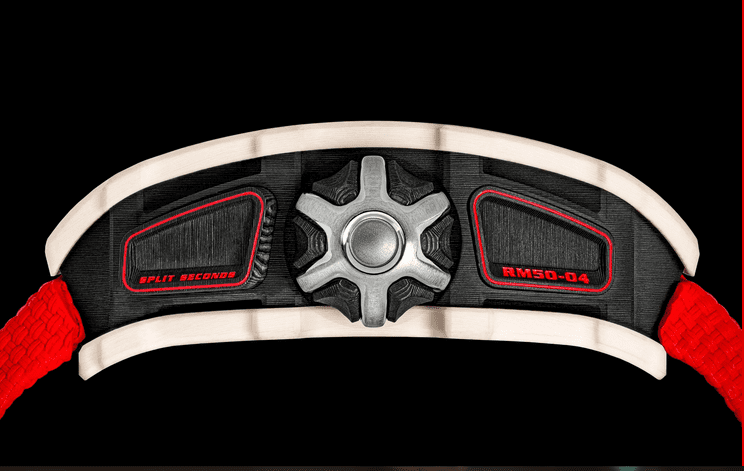 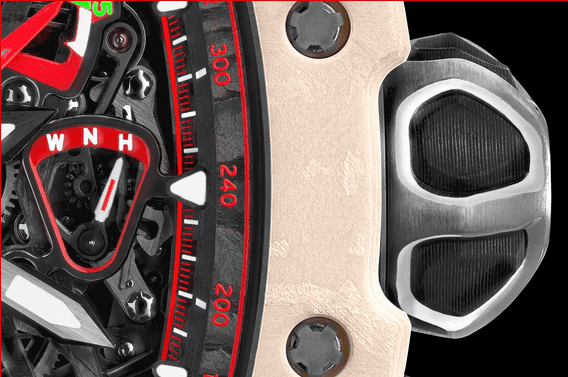 The design and execution of the watch demonstrate a highly conceptual holistic approach to the movement, case and dial. As a result, everything has been constructed according to extremely rigorous specifications, in the manner of analytical engineering methods used in the design of Formula 1 racing cars, where the chassis and the engine are developed in complete harmony. For example, a casing ring is no longer used, and the movement is mounted on chassis mounting rubbers (ISO SW) fixed by grade 5 titanium screws. Features such as these are evidence of uncompromising workmanship.

The colours used on the C38 single-seater are showcased on the bezel and case back in white Quartz TPT®. This is achieved by interlaying 600 layers of silicon each 45 microns thick and impregnating them with a white matrix before heating them to 120 °C in an autoclave. This process gives the material a very high resistance/weight ratio, non-allergenic properties, and excellent resistance to UV rays. Developed by North Thin Ply Technology, the technique is also used on the Carbon TPT® caseband, but this time using carbon fibres.

The case of the RM 50-04 is water-resistant to 50 metres thanks to two Nitril O-ring seals. The case is assembled with 20 spline screws in grade 5 titanium and abrasion-resistant washers in 316L stainless steel.

This additional security system prevents accidental overwinding, which could cause damage to the winding stem or put extreme pressure on the barrel spring.